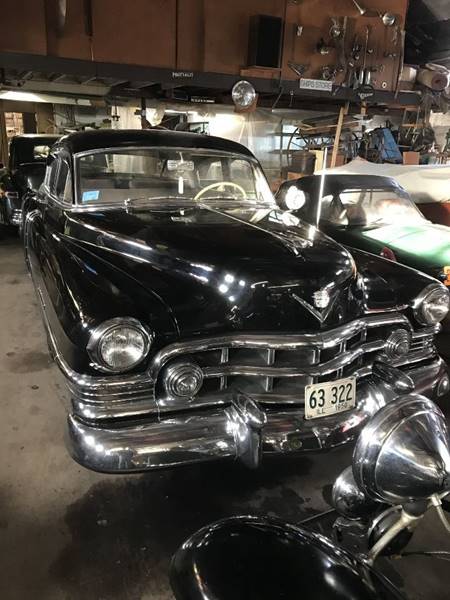 Ready to trade in?
Let us know what you have.
Have additional questions?
Give us a call and we'd be happy to help!

Excellent Series 62 with standard shift and only 53000 miles. Cadillac redesigned their Series 61 and 62 line of cars in 1950, giving them lower and sleeker contours, sweeping front fenders, long rear decks, and a broken rear fender line. The front grille grew in size, becoming larger and the hood extended out further than in prior years. There were round parking lights, long tailfin rear fenders with imitation chrome air slots, and a one-piece windshield. The Series 61 and Series 62 were similar in design, with the presence of rear Ventipanes on the Series 62 being one of the more distinguishable differences. For 1950, the Series 62 was available as a four door sedan, a two-door Club Coupe, 2-door Coupe DeVille and a 2-door Convertible Coupe. The four-door sedan was by far, the most popular, with sales reaching 41,890. Following in second place was the Convertible Coupe which had 6,986. Closely behind that was the two-door Club Coupe with seating for five, netting 6,434. There was a single rolling chassis created that received no coachwork; apart from this, the Coupe DeVille was the most exclusive bodystyle available, with 4,507 examples created. They were not the most expensive, that honor went to the convertible coupe, but their price tag was the second highest at $3,523. It was more affordable than the venerable Fleetwood, but remained rather rare. The Series 62 came standard with hydraulic window lifts and a Hydra-Matic transmission. The only engine offered by Cadillac in 1950 was a V8 unit that displaced 331 cubic-inches and produced 160 horsepower.