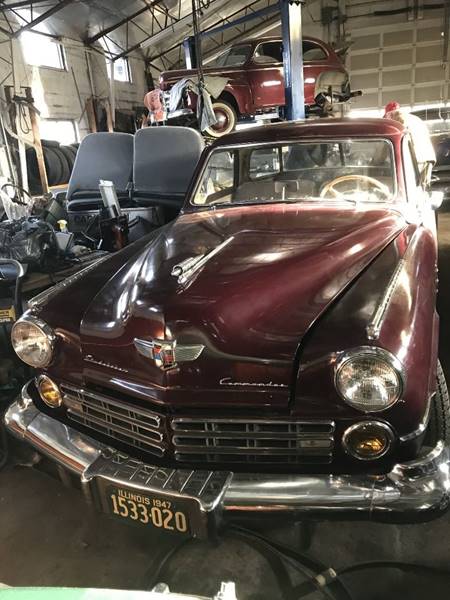 Ready to trade in?
Let us know what you have.
Have additional questions?
Give us a call and we'd be happy to help!

This solid Commander has a rebuilt engine and runs perfect and is a rare Starlite Coupe with overdrive. The Studebaker Commander is the model name of several automobiles produced by the Studebaker Corporation of South Bend, Indiana (United States) and Studebaker of Canada Ltd of Walkerville and, later, Hamilton, Ontario (Canada). Studebaker began using the Commander name in 1927 and continued to use it until 1964, with the exception of 1936 and 1959-63. The name was applied to various products in the company's line-up from year to year. The 1947 Commander was Studebaker top-of-the-line model and available in a variety of body styles. The line was divided into the Deluxe, Regal Deluxe, and Land Cruiser line. A convertible was available, only on the Regal Deluxe line. The Land Cruiser came in a single body style, a 123-inch Sedan. All Deluxe and Regal Deluxe models rested on a 119-inch platform. Power was from an L-head six-cylinder unit that offered 94 horsepower and was mated to a three-speed manual gearbox. An overdrive was available for an addition $90. Introduced in June 1946 as a 1947 model, the Studebaker factory in South Bend, Indiana, was able to beat just about every other major American manufacturer to market with an all-new automobile. They featured new and innovative styling by Raymond Loewy. The cars were lower, wider, and given a redesigned chassis and suspension. Both 1947 Studebaker models had six-cylinder engines, with the top-of-the-line Commander having the more powerful 94-horsepower version. The Commander Convertible was offered only in Regal DeLuxe trim, with stainless steel windshield trim and rocker panel moldings. Just 1,503 examples were built. The Studebaker Commander was produced for several years, representing several bodystyle changes, and first appeared in the 1920s. The company would continue to use the name until their demise in 1966. There were only a few years where the Commander did not appear in Studebaker's line-up during that time; those were in 1936 and 1959-1963. When the name first appeared in 1927, it was Studebaker's middle-series. As the years progress, it would move up and down market, often changing positions from year to year. The name would continue until it was dropped in 1935, only to reappear in 1937 where it served as the company's least expensive model, taking the place of the previous Studebaker Dictator. The company had decided to do away with the 'Dictator' name, due to the negative political connectors associated with the name. Mainly, Adolf Hitler in Germany had tainted the word 'dictator.' The Commander moved up-market in 1939 when Studebaker introduced the Champion model. After the Second World War, Studebaker dropped its President moniker, and re-positioned the Commander in its place. At the same time, Studebaker introduced an extended wheelbase model known as the Land Cruiser.